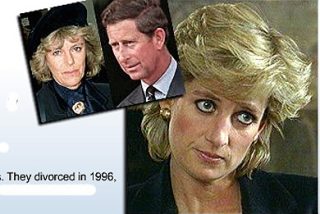 Straight from the celeb’s mouth

1).- «There were three of us in this marriage, so it was a bit crowded.»
— Princess Diana, in a 1995 BBC interview, on her marriage to Prince Charles. They divorced in 1996, and she died a year later. The third party, Camilla Parker Bowles, became Charles’ wife in 2005.

3.- “Why can’t you share your bed? The most loving thing to do is to share your bed with someone.”
— Michael Jackson, defending his practice of letting boys share his bed in a Feb. 3, 2003, interview with BBC/Granada’s Martin Bashir. The interview led to molestation charges; Jackson was acquitted in June 2005.

4).- “I can only tell you that it has been an honor and a privilege to come into your homes all these years and entertain you … I bid you a very heartfelt goodnight.”

— Nicole Kidman to David Letterman on Aug. 2, 2001, after her split from Tom Cruise. Both have since remarried, he to actress Katie Holmes, and she to country singer Keith Urban.

6).- “In the end, you have to come clean and say, ‘I did something dishonorable, shabby and goatish.’.”

— Hugh Grant to Jay Leno on The Tonight Show, July 10, 1995, explaining his June arrest for lewd behavior with a Los Angeles prostitute. Grant pleaded no contest. Girlfriend Elizabeth Hurley stuck by him, but they split five years later. They remain friends.

7).- “This town is a back-stabbing, scum-sucking, small-minded town, but thanks for the money.”— Roseanne Barr, in an ad she took out in The Hollywood Reporter for the magazine’s 60th anniversary in October 1990, two years after her sitcom Roseanne launched. The show ran until ’97.

— Ellen DeGeneres in Time magazine, April 14, 1997, just before her Ellen sitcom character came out as gay, too.

9).- “This moment is so much bigger than me. This moment is for Dorothy Dandridge, Lena Horne, Diahann Carroll. It’s for the women that stand beside me … And it’s for every nameless, faceless woman of color that now has a chance because this door tonight has been opened.”
— Halle Berry, at the 2002 Oscars, in her best-actress acceptance for Monster’s Ball. She’s the first black woman to win the category.

10).- “The heart wants what it wants. There’s no logic to those things. You meet someone and you fall in love and that’s that.”
— Woody Allen in Time in 1992, about his relationship with Soon-Yi Previn, the daughter of former girlfriend Mia Farrow. Allen and Previn wed in ’97. The age gap: 35 years.

— Whitney Houston in 2002 on ABC’s Primetime. Houston has since been through rehab several times, and last year split from husband Bobby Brown. She has been working on a new album.

15).- “For an actor, there is no greater loss than the loss of his audience. I can part the Red Sea, but I can’t part with you, which is why I won’t exclude you from this stage in my life.”
— Charlton Heston on Aug. 9, 2002, revealing he has Alzheimer’s. Heston has not made a TV or film appearance since 2003.

16).- “I’m in shock. And I’m so in love with my brother right now.”
— Angelina Jolie, thanking brother James Haven while accepting the supporting actress Oscar for 1999’s Girl, Interrupted. Since then she has become Brad Pitt’s companion and an upstanding citizen of the world.

17).- “I am sorry if anyone was offended by the wardrobe malfunction during the halftime of the Super Bowl. It was not intentional and is regrettable.”
— Justin Timberlake, in a statement after the 2004 Super Bowl spectacle with Janet Jackson. His career is booming, hers has faltered.

— Mel Gibson, to female deputy last summer after being pulled over for speeding and drunken driving.

20).- “That’s hot.”
— Paris Hilton’s trademark, dating back at least to the first season of The Simple Life in 2003. She eventually had the expression copyrighted.

21).- The jury “was not my class of people. There was not a producer, a press agent, a director, an actor.”
— Zsa Zsa Gabor to People in October 1989, after a jury found her guilty of slapping a Beverly Hills cop.

22).- “I just want one day off when I can go swimming and eat ice cream and look at rainbows.”
— Mariah Carey on MTV’s TRL in 2001, before entering rehab for exhaustion. Glitter bombed that fall, but in 2005 she put out a Grammy-winning hit album.

23).- “The virginity issue. There are so many emotions involved that I would like to be able to wait until I know I’m with the right person and I’m married.”
— Britney Spears in a 2002 interview with Britain’s Daily Star. She’s now 25, has married twice, split up twice (one annulment, one divorce) and has two kids.

25).- “You only lie to two people in your life, your girlfriend and the police. Everybody else you tell the truth to.”